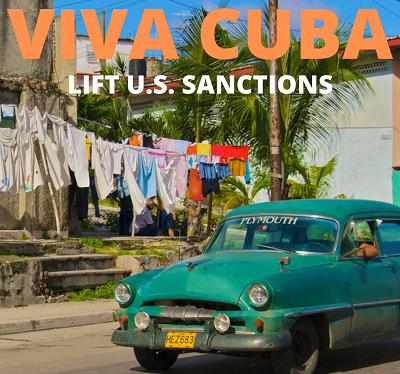 This is exciting and we must act fast: We have a rare chance to hold — and win — two historic votes in Congress to back parts of U.S. sanctions on Cuba on food, medicines, and remittances (see explanation below). These are amendments to a spending bill that will be voted on this Tuesday, and we need Rep. McGovern, who is head of the Rules Committee, to allow these amendments to go to the floor for a vote.

Do you have a moment to help convince Rep. McGovern to bring these amendments to a vote?.

Background information on the congressional amendments to allow food, medicine and end the cap on remittances to Cuba:

The Trump administration has intensified its attempts to strangle the Cuban economy, applying over 90 sanctions over the past year. The administration imposed a cap on remittances, limiting the amount of money Cuban Americans can send to friends and family on the island to $1000 every 3 months. Now, in the middle of the coronavirus pandemic, the U.S. government sanctioned a shipping company for transporting food and medicine to Cuba and has threatened to sanction others.

Congressman Bobby Rush (D-IL) has introduced two amendments to the appropriations bill that funds sanctions enforcement to prohibit the use of funds to enforce sanctions on Cuba related to selling, delivering, transporting or providing food and medicine, as well as rolling back the Trump administration’s cap on family remittances to Cuba.

The Rules Committee is chaired by Rep. Jim McGovern, a longtime advocate against sanctions on Cuba. It is largely up to Rep. McGovern to make the final decision about whether the amendments come up for a vote. There are concerns, however, that Democratic leadership may seek to prevent the House from voting on these amendments, so McGovern's support is critical. Email Rep. McGovern NOW!

While Cuba reports one of the lowest rates of confirmed Covid-19 in Latin America, the people are suffering from a severe shortage of food and medicine, largely as a result of a defensive shutdown to stop the virus and a virtual lack of foreign tourism. The economy has also been hit by the limiting of remittances. These two amendments could go a long way towards helping Cubans weather the pandemic.